​This section deals with the spread of the Croft Family from East Witton in the 16th century to other villages in the area and beyond over the following 250 years.

The maps on this page shows the location of East Witton and the surrounding villages which became inhabited by the Croft family during the 16th -19th centuries. 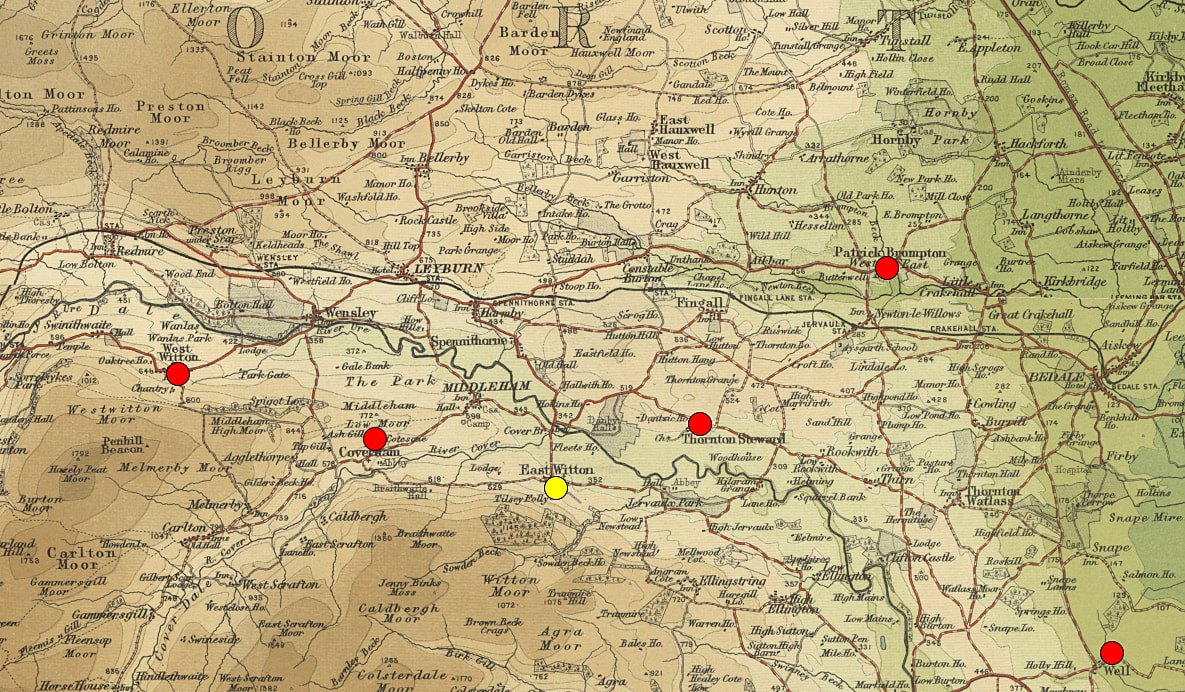 East Witton and surrounding villages which were inhabited by Croft Families during the 16th century
Searching through the parish registers of North Yorkshire, the above distribution of baptism and burial records occurring for Crofts can be seen. This cannot be assumed to be an exhaustive list, since while parish records were supposed to begin in 1538 after a mandate issued by Henry VIII, and again reinforced by Elizabeth I in 1558, many records have not survived to the present day. However an overall picture of the distribution can be drawn, and we can see from the above map that the spread of the family during the 1500's has not gone very far at all. The distance from East Witton to Patrick Brompton is only about 5 or 6 miles, and the distance to Well, south east of East Witton, is about 8 miles.

The number of baptism/burial entries in these places is also very small during this period, indicating only one family in each place. Although the parish registers for East Witton itself have not survived for this period as previously mentioned, the wills which have survived again indicate only one, or perhaps two Croft families living in East Witton in the 16th century. 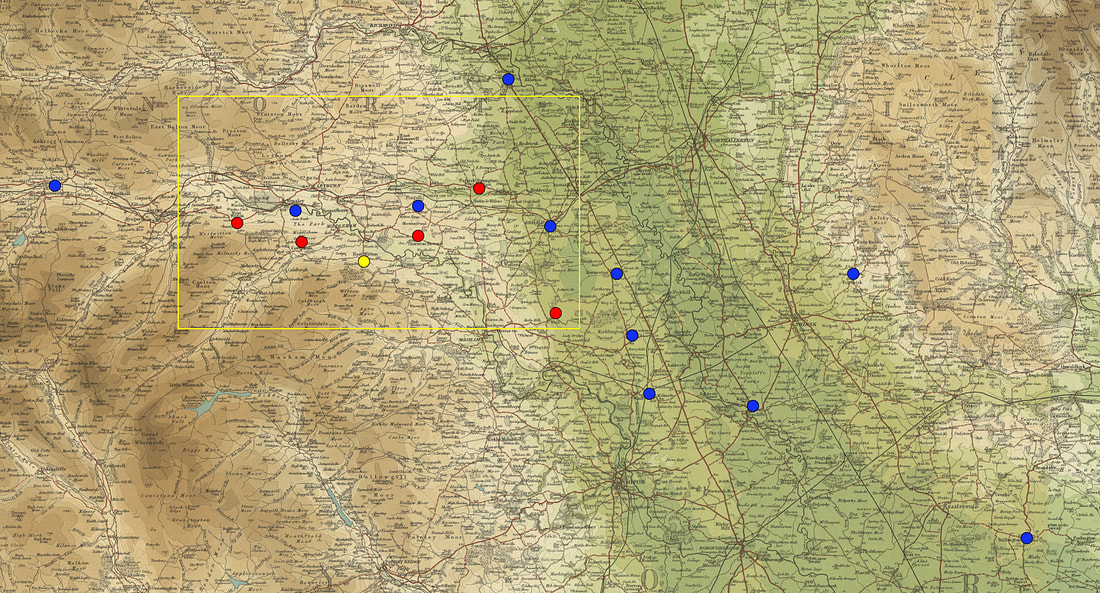 The yellow box (and the red dots in it) is the area covered by the previous map of 16th century habitation.

It's certain that there were Crofts living in Askrigg earlier than the first baptism record in 1675, as although there are no surviving records for Askrigg prior to this date, but there are a lot of Croft baptisms from the very beginning of the existing records, indicating that the family must have been there for at least one or two earlier generations, perhaps back to the beginning of the 1600s. 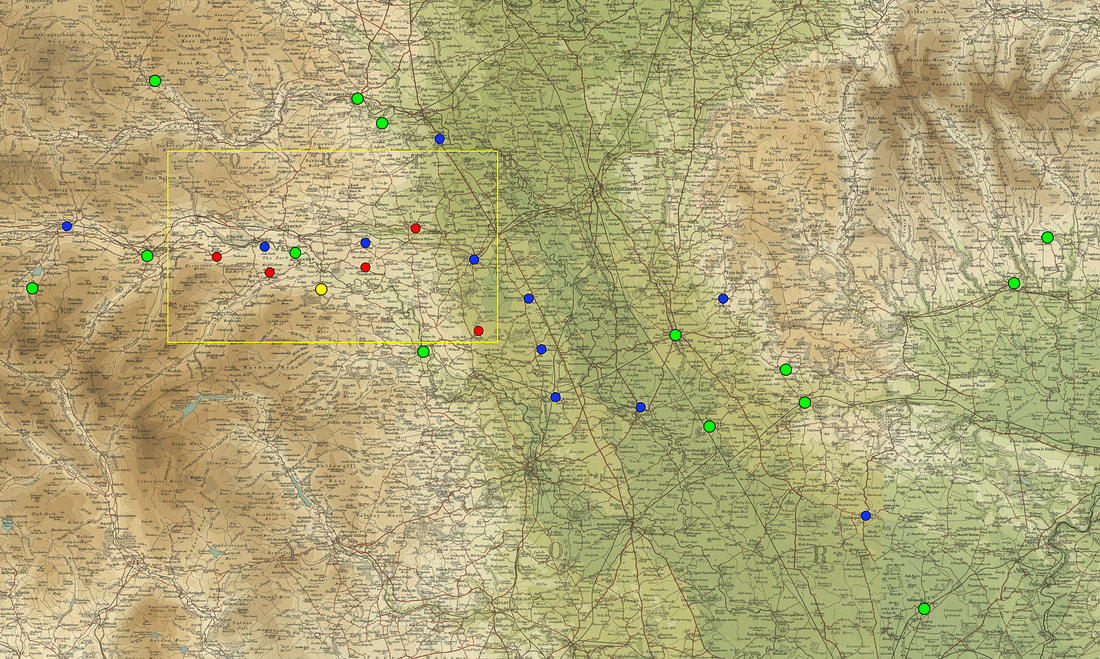 The yellow box (the area occupied by the Crofts during the 16th century) gives a visual indication of the degree that the family had spread throughout the county during the following two centuries.
​
The Crofts of Wood Hall
​One of the earliest examples of members of the Croft family moving out from East Witton is those who relocated to Patrick Brompton (about 5 miles North East). The records are very sparse, but the parish registers, which commence in 1560, show evidence of both baptisms and burials in the late 1500's, although it looks like only one family as there are no more after 1619.
The family then seems to spread out from Patrick Brompton, as in 1649 records begin to show Crofts in nearby Fingall (or Finghall as it became), about 3 miles west of Patrick Brompton. The family in Finghall are described as "of Wood Hall"). This was the name of the farm in which they lived. It's situated just north of Finghall itself (about half a mile), and is still there today. Adjacent to the farm is a wooded area called Croft Wood. When this acquired its name I don't know, but it is presumably named after the family who owned it, along with the farm.
​ 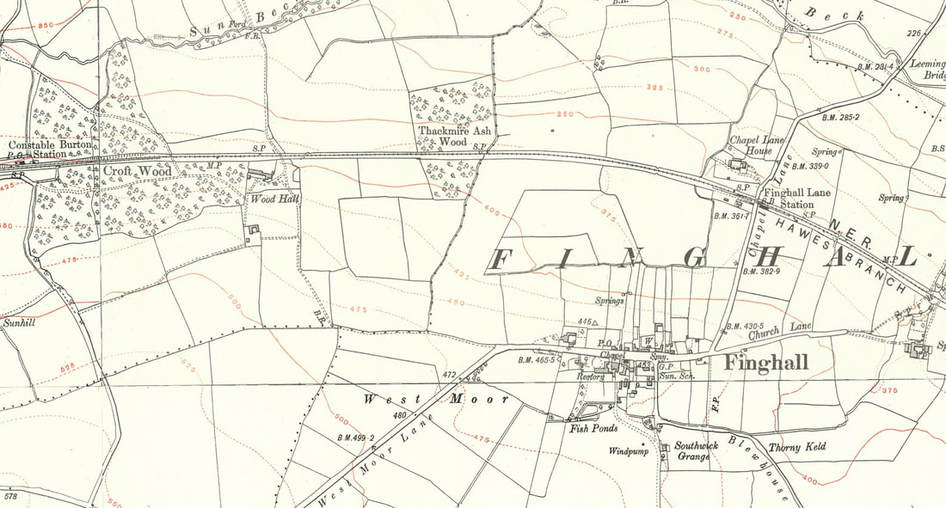 OS Map from 1895 showing the location of Wood Hall and Croft Wood
The parish registers of Fingall begin in 1597, but much of the early entries is unreadable. The first identifiable individuals to appear at Wood Hall are Isabella Croft, who is married in 1652 to Ralph Clerkson, and Richard Croft, baptised in 1649, son of William Croft. The next is John Croft, son of another John Croft, baptised in 1659. I think it is a fair assumption that the William and John who were having children baptised in the 1640s/1650s were probably brothers, and Isabella was their sister. I can't find any baptisms of individuals which could be these three. They would all have been born in the 1620s - 1630s, so could have been born at Wood Hall and are simply not identifiable in the register, or at Patrick Brompton, similarly unidentifiable, or it's possible that they were all born in East Witton, as the registers there don't begin until 1664.

​John Croft (b.1659) remained at Wood Hall and had a family of 5 boys and 1 girl. (I can find no baptism entries for any of these children, but when John died in 1709, he left a will in which he names them). In the will his eldest son, William, is left £5 (equivalent to around £650 in today's terms), his sons Henry and Marmaduke are left 40 shillings (equivalent to £250) and his son George gets only 5 shillings (equivalent to around £35 - obviously not his father's favourite son!!). Everything else, all the house contents, farming gear and livestock he leaves to his son John and daughter Mary, and expresses his wish that they will continue to farm at Wood Hall.
It seems John at least did so, as when he died in 1753, he is described as "of Woodhall" in the burial register.
I have not been able to find sons William, Henry and Marmaduke in their later lives, but George left a good trail in the records.

George married Ann Theakston at Patrick Brompton in 1703, and the following year is farming at High Jervaux, about 3 miles south of Wood Hall. Two children, Marmaduke (1704) and Margaret (1706) were baptised here (Margaret died in infancy), but by 1708 George had moved and to Crakehall, which is situated between Bedale and Patrick Brompton. Two children were born here, Frances (1708) and George (1710), and in the baptism of George, his father is described as "of Scroghouse". This is the farm where they were living, and is still there today. By 1712 George and his family had moved again, and were living back at Wood Hall. He had seven more children here, 2 boys and 5 girls. George died at Wood Hall in 1753, and his wife Ann died 4 years later in 1757. It seems that at least several of George and Ann's children had stayed to farm at Wood Hall, as eldest son Marmaduke, when he died in 1737 was still there, and son George is described as "Yeoman of Wood Hall" in his mother's will in 1757.

Marmaduke Croft (b.1704, son of George and Ann) married Ann Clarkson in 1733. They only had two children, before Marmaduke died in 1737. His two children were George (b.1734) and Marmaduke (b.1736).
His eldest son, George, married Elizabeth Thackeray at Burneston (about 8 miles East of Wood Hall) in 1758 and had a family of 5 boys and 6 girls. The first nine were all born at Wood Hall (1759 -1772), but the final two were born at Newton le Willows, about 2 miles away (1774 and 1776), indicating that George and family had left Wood Hall. There is a farm on the edge of Newton le Willows called Croft House, which I suspect is the farm which they owned.

I have no evidence of Crofts at Wood Hall after the late 1700s, and it may be that the farm passed to another family at this time.

George Croft, (born at Wood Hall in 1763, son of George and Elizabeth), married Elizabeth Peacock at Richmond in 1789. He was a flax dresser by trade, and had five children, three of whom survived to adulthood. His eldest son, George (b.1789) became a wine merchant and was twice Mayor of Richmond (1836 and 1839). His second son, John (b.1791) became Vicar of Catterick, and his third son, Christopher (1793) also became a wine merchant and was Mayor of Richmond five times between 1837 and 1862.