The township of Tockholes lies upon the steep slopes and spurs of the moorlands to the south of Livesey.  From Cartridge Hill on the south, and along the western side of the township the land slopes steeply to the River Roddlesworth, which, flowing down a narrow valley, forms the boundary against Withnell in Leyland Hundred.  On the east a brook rising on Cartridge Hill and flowing below Darwen Moor down Earnsdale forms the boundary against Over Darwen.  There are no main roads, but a minor road from Livesey runs through the middle of the township and joins the main road from Preston to Bolton beyond Hollinshead Hall at the southernmost point of the township.

Lower Darwen, like the adjoining township of Over Darwen, takes its name from the River Darwen, which flows through it.  The ancient township extended from the banks of the River Darwen over the moorland heights which enclose the valley to the east and west, bordering on Tockholes The land was parcelled out in numerous farms, the principal industry in days gone by being the manufacture of cotton cloth.

Roger and Ann Croft must have made the move from Whittle to Darwen fairly soon after marrying, as on the 10th June 1753 their first child, Thomas, was baptised at Tockholes Chapel. Their abode is given as Livesey. A year later on 12th November 1754 there is a record of the burial of two abortive children (twins) of Roger Croft at St. Mary’s Parish Church in Blackburn.  The abode at the time is given as ‘Darwen’.  In January 1756 their first daughter, Betty, was baptised at Lower Independent Chapel, Over Darwen and this time their abode is given as Tockholes Fold, a farm situated in Tockholes, a few miles over the hill from Darwen.  Whether Roger had bought the farm or was a tenant, is not known, although it seems likely that he was a tenant as he remained here for only about five years, and may well have shared the house with another family.  The farm is still standing to this day, and while the barn bears a 19th century date the house is much older, thought to be at least 250 years old (c.1750).  The farmhouse still standing therefore would have been the same house which Roger and Ann lived in for the years that they were in Tockholes.

As already stated, It is possible that Tockholes Fold was actually two dwellings, as in 1759 when Thomas Hoghton and his wife Mary had their first child, their address is also given as Tockholes Fold. It seems that Tockholes Fold was a good property; Thomas Hoghton went on to marry Jane Peel, aunt of Sir Robert Peel the first Baronet, and in 1841 Henry Hollinshead, a man “of independent means”, resided there.  Roger’s second daughter, Jane, was also born in 1759 at Tockholes Fold, but in 1761 their third daughter, Isabella, was baptised at Spotland Hall Fold Chapel in Rochdale, about 12 miles from Darwen.  In April 1762, Roger and Ann's son Thomas died and was buried at St. Mary, Blackburn. By the time their next child Sarah was born in 1763, they have moved on again and are living at Oakenhurst, Lower Darwen.

Tockholes Fold Farm and Tockholes Fold Farm Cottages
We know that Roger ultimately owned Oakenhurst Farm in Lower Darwen, as he left it to his son, James, in his will some years later.  This would also imply that Roger was not a poor man when he first travelled to Tockholes, as it seems unlikely that he could have become prosperous enough to buy a farm in the five or so years he spent at Tockholes Fold unless he was reasonably well off in the first place.  It could well be that Roger began as a tenant at Oakenhurst, and subsequently purchased the farm following an Inclosure Act in 1779 when the common called Lower Darwen Moor, containing 600 acres, was allotted and inclosed.  Another daughter, Hannah, was born in 1766, and Roger’s only surviving son, James Croft, was born at Oakenhurst in 1768.  Roger must have fallen out with the Lower Independent Chapel at Darwen by this time, as he had James baptised at St. James Chapel, Over Darwen, later to become St. James Church. 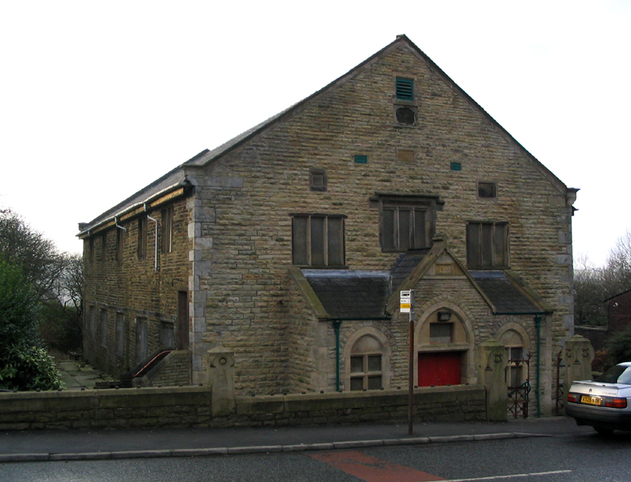 Roger Croft died in 1804 at Oakenhurst and was buried at St John's Church, Blackburn.  By the time of his death, Roger had become a very successful man.  At the baptism of his son James in 1768, he is listed as a ‘Fustian Manufacturer’ (fustian is a kind of cotton fabric), and again in his will he is called a ‘Cotton Manufacturer’.  In his will, dated 19th January 1804, he leaves a total of five houses in Blackburn, a business and premises on Darwen Moor called ‘Step Back’ (cotton manufacturing business) as well as Oakenhurst Farm itself consisting of dwelling house, croft, gardens, stable, cattle shed outhouses and cottages.  His son James was bequeathed the farm, the other properties shared amongst Roger’s children and grandchildren. 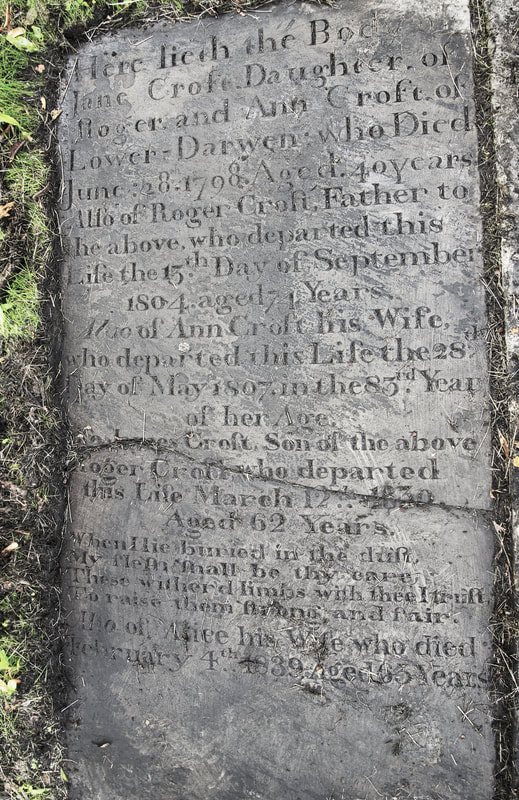 Gravestone at St.John's Blackburn marking the grave of Roger and his wife Ann, and also Jane their daughter and James their son.
​ 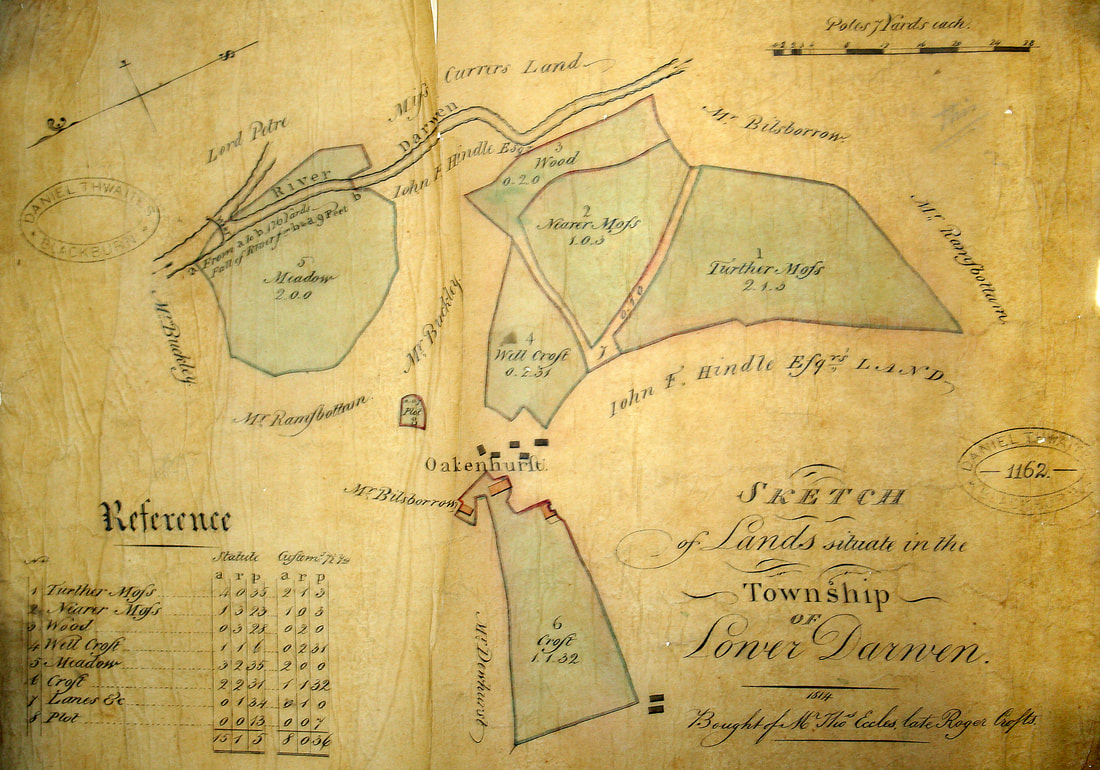 Map of Oakenhurst
James Croft, only surviving son of Roger, married Alice Marsden in February 1800 at St. Mary’s Parish Church, Blackburn.  In the marriage deeds he is stated to be a ‘Warper’, someone who twists the cotton ready for weaving into cloth.  This was presumably within the family cotton manufacturing business.  He didn’t take on the farm until four years later when his father, Roger, died.  In subsequent documents he (James) is described as either ‘Cotton Manufacturer’ or ‘Farmer’.  When James and Alice were married, Alice was already heavily pregnant, as their first child, Thomas, was born on 1st April 1800, only six weeks after the marriage!  They went on to have eleven children in all, between 1800 and 1815.  They were all baptised at either St. Mary’s or St. Pauls church in Blackburn, with the exception of the last child, named Croft Croft (yes, really!), who was baptised at the Lower Independent Chapel in Over Darwen.  This early part of the 19th century was a great time of upheaval, with the industrial revolution forcing cottage industries such as handloom weaving out of business.  Many weavers had to either go and work in the mills which were springing up, or travel to other areas where work for hand weavers was easier to find.  It is certain that James and his family found life increasingly hard at this time.  It would seem that James had to sell most, if not all of the land which he had inherited from his father, as a plan of the farm dated 1814 describes it as having been bought by Mr.Thomas Eccles.  Either James retained the farmhouse and enough land to maintain a living, or more likely he sold the entire farm and remained as a tenant.  What is certain is that he and his family remained living at Oakenhurst.  James Croft died in 1830 and was buried at St.Johns Church Blackburn alongside his parents Roger and Ann, and his sister Jane.  His wife Alice survived him until 1839. She was also buried at St.Johns Blackburn, alongside James. 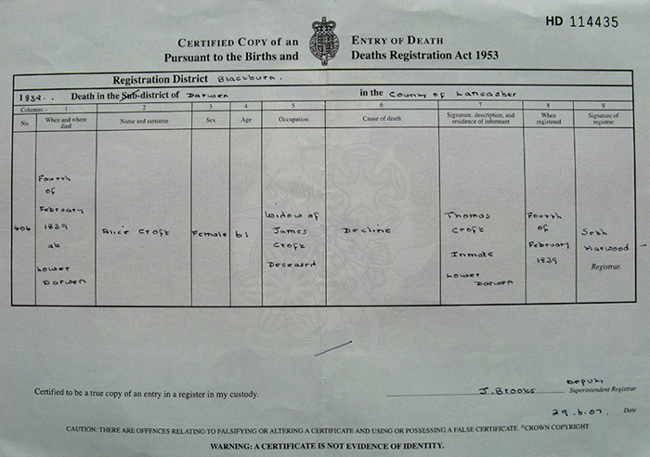 Death Certificate of Alice Croft, widow of James Croft of Oakenhurst, Lower Darwen (1839)
I shall briefly outline the fates of James’ family here:

1)     Thomas Croft.
Born in 1800.  He never married or had any children (as far as I know).  In 1841 he is shown in the census as still living in the family home at Oakenhurst, his mother, Alice, having only died two years before.  He is described as a ‘Farmer’.  Living with him are his four youngest siblings, all aged in their twenties, as well as his brother’s wife and his sister’s daughter.  Thomas remained at the farm working the land until his seventies when he is described as ‘Farmer of 5 Acres’, and finally in 1881 as ‘Retired Farmer’.  He died in 1883.

3)     Christopher Croft.
Born in 1802.  Married Jane Aspin in 1826.  A weaver by trade, Christopher and Jane remained in Lower Darwen until sometime in the 1840’s when they moved to Sharples near Bolton.  They had three children, James, John and Alice.  Christopher died in 1868.

4)     George Croft.
Born in 1803.  Married Jane Green in 1832.  Occupation given as ‘Weaver’ at this time.  They had three children together, living in Over Darwen.  Jane died in 1841, and George remarried Hannah Shorrock in 1842.  George married well; Hannah’s cousin, Eccles Shorrock owned Hollinshead Hall Farm in Tockholes (and subsequently went on to be a prosperous Mill Owner in Darwen), and in the 1851 census George and Hannah are living and farming at Hollinshead Hall.  George is described as ‘Farmer of 80 Acres of Land’.  George and Hannah had three more children together, and continued farming at Hollinshead Hall.  In the 1881 census he is described as ‘Farmer of 100 Acres’.  George died in 1882.

8)     Joseph Croft.
Born in 1810.  Married Ann Marsden in 1842.  He was a weaver, and he and Ann had three children.  They remained in Lower Darwen until the 1850’s when they, like his brother Christopher, moved to Sharples near Bolton.  In fact, Joseph must have deliberately followed his brother, as they both lived in the same village (Bank Top) at one point.  Joseph evidently couldn’t make a living from weaving, as by 1871 he is described as a ‘Licensed Hawker’ (salesman), and in 1881 a ‘Traveller in Drapery’.  Joseph died at bank Top in 1890.

11)  Croft Croft.
Born in 1815.  Married Mary Lightbown in 1841.  He became a Powerloom Weaver in one of the emerging mills in the area (there were several in Darwen by the mid 1800’s), and he and Mary had three children.  They continued to live with Croft’s eldest brother, Thomas, at Oakenhurst until Croft’s death in 1856 at the age of 41.  Mary had predeceased him in 1853.  After their parents’ deaths, Croft’s children continued to live with their uncle at Oakenhurst well into adulthood, only leaving when Thomas finally gave up the farm and retired in the 1870’s.


Returning now to James Croft’s second son, Roger.  Born at Oakenhurst in 1801, he married Nancy Shaw in 1823.  He, like the rest of the family, was a cotton weaver by trade.  Roger and Nancy had five children together, all born in Lower Darwen.

1)     Their first child, James, was born in 1824.  I have no record of his death, but he must have died as a child as there is another child born a few years later to Roger and Nancy, whom they also named James.

4)     Roger and Nancy’s fourth child was another James, born in 1830.   As this child was only the second boy they’d had, the first having already died, they named this one James also (Roger’s father, James, had only just died a few weeks before the baptism of this child, and it would seem that Roger was keen to keep his father’s name alive).  Sadly, this child also died as an infant, aged only a few months.

5)     Roger and Nancy had one more child in 1832, named Alice.  She grew up to be a cotton weaver as many of her family had done, and in 1852 married Thomas Hartley in Blackburn.  I have no evidence of her fate in later life.

Nancy, Roger’s wife, died in 1836 in Lower Darwen.  She, like most of her children, was buried in St. James Church Lower Darwen.  Following the death of his wife, Roger left Lower Darwen, and in 1839 he married his second wife, Ann Golding , at Walton-le-Dale Parochial Chapel, near Preston. There is no evidence that Roger ever returned to the Darwen area, but travelled considerably in the following years.