The following sections deal with the movement of my particular branch of the family through Lancashire, beginning with Lawrence Croft's departure from his birthplace in Caton in the mid 17th century, and his relocation to Whittle-le-Woods near Leyland.

Following the lineage over the next 250 years sees my Croft ancestral line move within the county several times, beginning in Whittle-le-Woods, moving after a couple of generations to Darwen near Blackburn, then via Burnley finally leaving Lancashire for Yorkshire, where I myself was born.

Whittle-le-Woods is a small village on hilly ground, not far from the town of Leyland.  The principal road is that from Chorley to Preston, which goes north through the village.  From this point other roads branch off to Heapey in the east, Brindle in the north-east, and Leyland in the west. Cotton was manufactured in years gone by and calico printing was also carried out.  There are quarries, from which millstones were obtained, and at the end of the 17th-century a lead mine was worked on Sir Richard Standish's land.

Lawrence Crofte first appears in the records here in 1653 when he is having his daughter baptised at St.Andrew’s church in Leyland (there was no church in Whittle itself at this time).  He was about 25 years old at this time, and as well as being already married to his wife Ann, he already had two children, Elizabeth and Lawrence. We know this from the marriage records; these first two children both married in Leyland Church in 1680. There is no record of Lawrence senior’s marriage to Ann, or baptisms of these first two children in Leyland, (nor in Caton), but unfortunately there are gaps in both the marriage and baptism records of Leyland from 1643 - 1652, precisely when the marriage to Ann and the baptisms of his first two children would be! During this highly turbulent time of civil war in England, many Parish records were not kept, and it is possible that this marriage and baptisms were not even recorded. In any case, the records do not exist now.

The reasons for Lawrence ending up in Whittle-le-Woods can only be surmised, as there is no record which states the exact time of his relocation from Littledale, some 25 miles north of Whittle. However, if we look at the events taking place at that time, a probable cause can be seen.
​
The end of the First Civil War in 1646 meant that armed political Royalism was at an end, but despite being a prisoner, King Charles I was considered by both himself and his opponents as necessary to ensure the success of whichever political group could come to terms with him. Thus he passed successively into the hands of the Scots, Parliament and the Commonwealth Army; on 3 June 1647, the Commonwealth Army seized the King, after which the English Presbyterians and the Scots began to prepare for a fresh civil war, less than two years after the conclusion of the first, this time against "Independency", as embodied in the Army. After making use of the Army's might, its opponents now attempted to disband it, to send it on foreign service and to cut off its arrears of pay. The result was that the Army leadership became exasperated, and, remembering not merely their grievances but also the principle for which the Army had fought, it soon became the most powerful political force in the realm. From 1646 to 1648 the rift between Army and Parliament widened day by day until finally the Presbyterian party, combined with the Scots and the remaining Royalists, felt itself strong enough to begin a Second Civil War.
During 1648 there was revolt in favour of King Charles in several areas of the country, but in most places the revolt collapsed without serious fighting. In the North of England this did not prove to be the case, with battles between Royalist and Parliamentarian forces taking place in Yorkshire, Cumbria,and Northumberland.
In July 1648, the Scottish "Engager" army crossed the border in support of the English Royalists, under the command of the Duke of Hamilton, and marched south. By August 2nd  his army had reached Kendal,  and by August 9th he was at Hornby, where he remained for some days. Hornby of course is only a few miles from Claughton, Caton and Littledale, and their arrival must have caused quite a stir in this pro-Royalist area. On August 10th Hamilton directed a letter to the Ministers of Lancashire who, on his approach, had withdrawn from the northern parts of the county and assembled at Lancaster. He declared that the object of his coming was "for settling Presbyterian government according to the Covenant, liberating and re-establishing his Majesty, and for other ends conducing to the good and peace of the Kingdom."  Hamilton and his army then marched on south. The road they would have taken (as can be seen on the map below) was the road through Caton, passing less than 2 miles from Littledale, Lawrence Croft's home. One can easily imagine a 20 year old Lawrence, caught up in the excitement and enthusiasm of the campaign to free the King, joining the army as it marched, as many did.
The battle which ended this march south has been named The Battle of Preston, but in fact much of the fighting took place just south of Preston, around Walton-le-Dale, less than 5 miles from Whittle-le-Woods. The result of the battle was a defeat for the Royalist supporters, and effectively ended the Second Civil War.

Looking at the evidence we do have for Lawrence in Whittle, his arrival there in 1648 fits perfectly - marriage the following year in 1649, and the births of his first two children between 1649 and 1652. As previously stated, unfortunately the church records for this period are lost so it can't be proved, but I feel it's a likely scenario nevertheless. 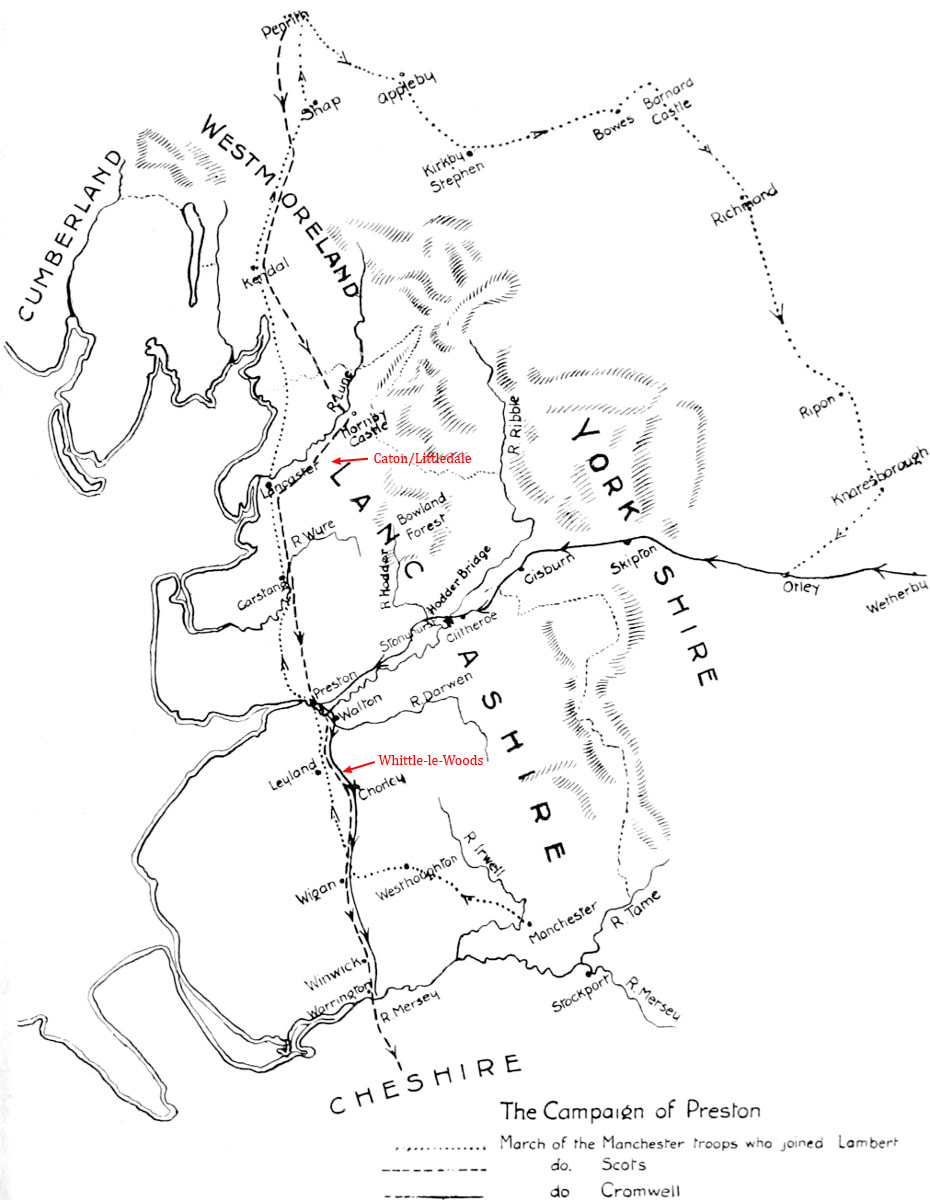 ​
​At around the same time as Lawrence appeared in the Whittle church records (1653), there is another record of him, about 20 miles south of Whittle -le-Woods, in Prescot. The following section from "A History of Plague in Lancashire" mentions Lawrence specifically: 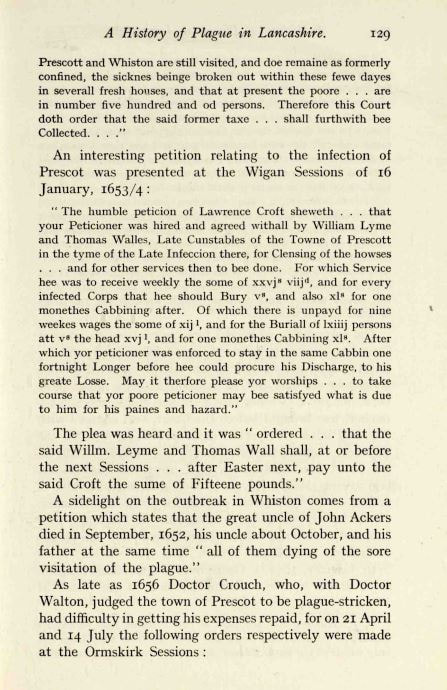 As the article is from the Wigan Sessions of January 1653/4, we can assume that this dangerous work which Lawrence undertook was sometime during the year 1653, the same year in which his daughter is baptised in Leyland, and he is described as "of Whittle-le-Woods".

Lawrence continued in Whittle and had six children baptised there in total, the last in 1668.  In the Hearth Tax return of 1665 Lawrence is shown as having a house with four hearths.  The lord of the manor has a dwelling with nine hearths (Crooke Hall), the second largest house has five hearths, and Lawrence’s house is thus the third largest in the township.  As 1665 is four years after the restoration of the monarchy, it would seem that Lawrence’s fortunes had taken a turn for the better in this period. Whittle-le-Woods was a rural area, and a dwelling with four hearths would be a sizeable farmhouse! Lawrence appears once more in the records in Whittle, this time in 1680 when he is petitioning the lord of the manor about a dispute over his property. 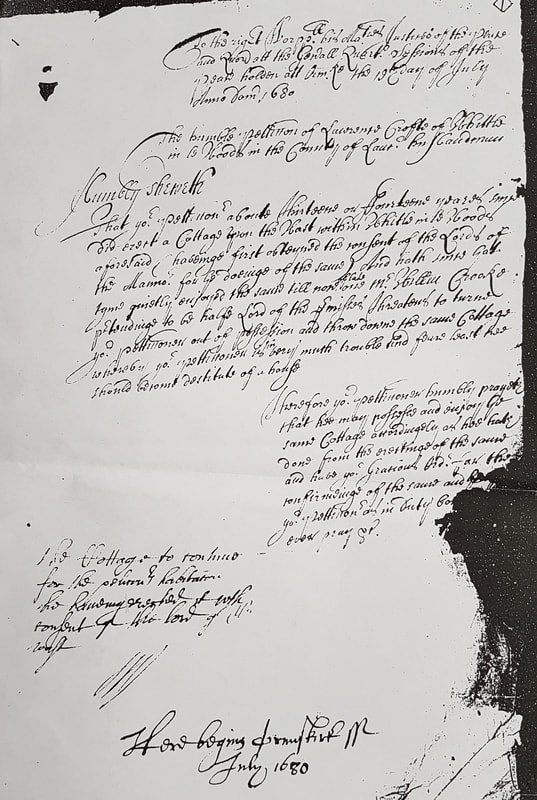 A transcript of the above document reads as follows:

The humble pettitton of Lawrence Crofte of Whittle
in the Woods in the County of Lancaster husbandman.

So we can see from this, that about the year 1666 Lawrence had become wealthy enough to build himself and his family a house in Whittle (He already five children by this point, with another on the way in 1666). Whether this is the same property referred to in the Hearth Tax return of 1665, with four hearths is uncertain, as he is a little vague about the date of him building his house.

It seems from the verdict at the bottom of the petition that he was successful in defending his home from eviction, and perhaps the property stayed in the family for several generations - Lawrence's children and grandchildren are all in the records, living in Whittle until the mid 1700s, after which time the family is dispersed around Lancashire and disappears from Whittle-le-Woods.
Lawrence Croft had 8 children in total, 4 boys and 4 girls (one girl died in infancy) between 1650 and 1668, and finally died in Whittle-le-Woods in 1686 at the age of 58.  As mentioned, Lawrence’s descendants continued in the area, marrying and raising families for two more generations, but it is Lawrence’s youngest son, Thomas, who I follow here.

Thomas Croft was born in 1668 in Whittle-le-Woods, baptised at Leyland.  He married a woman named Isabel around 1690 (I have not found a record of the marriage, so I have no way of knowing Isabel's unmarried surname, but her burial in Leyland church in 1728 describes her as "Isabel, wife of Thomas Croft of Whittle"). They had a total of ten children between 1691 and 1709, but sadly all but one of these children died before reaching adulthood. This is a severe mortality rate, even for those times, but I have no record of the causes of death. Luckily (for me!) one of Thomas and Isabel's children did survive, and he was also named Thomas. As already mentioned, Isabel died in 1728 (around the age of 58), and her husband Thomas died in Whittle 19 years later in 1747 at the age of 79.

Thomas and Isabel's only surviving child, Thomas Croft was born in Whittle in 1707, baptised at Leyland.  He married Elizabeth Atherton in 1728 at Leyland church and they had four children, Roger (1732), James (1733), Isabel (1739) and Betty (1740).  All were baptised at Leyland with the exception of Betty, their last child, who was baptised at Euxton, a few miles away.  The reason for this is not known to me, but perhaps his wife Elizabeth had family there. James, Isabel and Betty all died as infants (again, a high infant mortality rate), but Thomas’s eldest child, Roger, did survive to adulthood. Thomas Croft died in Whittle in 1752 at the age of 45

Roger Croft, surviving son of Thomas, was born in Whittle-le-Woods in 1732. He married Ann Pickup in 1752 , again at St.  Andrew’s church, Leyland.  Roger and Ann did not remain in Whittle, however, and the descent of my Croft line now moves again, as Roger and his new bride left Whittle-le-Woods and travelled east some  five or six miles to Tockholes, and then on to Darwen near Blackburn.

With Roger's departure from Whittle-le-Woods, the Croft name disappears from the records there, as the descendants of Lawrence Croft of Littledale appear in other areas of the county, primarily around 10 miles to the west Ormskirk and Rufford area.