Croft Family History
The most notable Croft family in England originate in the county of Herefordshire.  The word ‘CROFT’ is of Saxon origin, and refers to a farm.  In fact, in the north of England and in Scotland, farms can be still be referred to as ‘Crofts’, and farmers as ‘Crofters’.  However, the CROFT family are not of Saxon origin, but were Normans introduced to Herefordshire before the Conquest, in the time of Edward the Confessor (around 1050).  The family were styled ‘de Crofte’ (meaning ‘of Croft’) for four hundred years, the name being taken from the place which they settled and made their home.  Croft Ambrey, the iron-age hill fort situated close by Croft Castle (the home of the Croft family) dates back to the 4th century B.C.  and is said to be the site of Caractus’s resistance against the Romans in the 1st century A.D.; the name ‘Croft Ambrey’ comes from the British King Aurelius Ambrosius who made it his camp in the 5th century A.D. 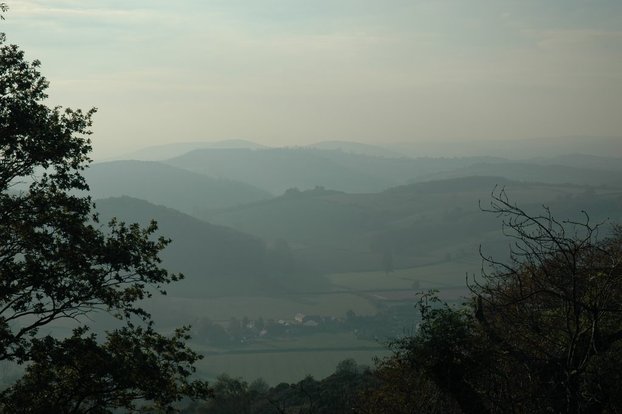 View of the Welsh Hills from Croft Ambrey
In the middle of the 11th century Herefordshire was placed under a Norman Earl of the highest rank – Ralf, son of Drogo, Count of the Vexin Normand, and Goda, daughter of King Ethelred II.  By the time of the Domesday Book (1086), the area including Leominster and Croft was held by William de Schoies.  According to the Domesday Survey, Croft, Leominster, Waverton (Wharton), and Newton were held by Bernard ‘the Bearded’ (Bernard le Barb), as an under tenant of William de Schoies, his overlord.  Bernard also held more lands under Durand, the Sheriff of Gloucester.  This Bernard became Bernard de Crofte, the founder of the Herefordshire family of Croft.  It’s thought that Bernard was born around the year 1040, so it’s unlikely that he was born in England.  More likely he came to England from Normandy as a young man in the years before the Conquest.  There is no actual evidence for this however, as no documents referring to his origin exist. 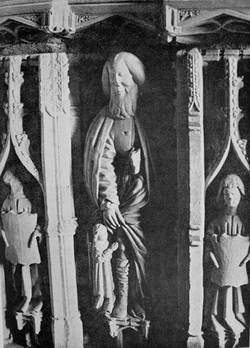 The picture on the left shows a detail on the tomb of Sir Richard Croft at Croft Castle (about 1509). The figure supposedly depicts Bernard de Croft.

We do know that Bernard spent his later years as a monk at the Priory of Thetford, Norfolk.  Monastic  deeds discovered at the British Museum in the last century confirm that Bernard had a son, Gilbert, and that Gilbert had a son, Hugh.  These charters read as follows:

The Charter of Gilbert de Crofte, lord of the soil of Waverton.

“Gilbert de Crofte, by grant of Sir Robert son of William, granted two parts of the tithe of Waverton to the church of St.  Mary of Thetford in free alms, as his father Bernard, before he had become a monk there, gave to them in free alms.  These being witness: Arnold, priest of Dile, Aubrey the knight, Walter de Traverley, Arnold de Snareshell, Aubrey the Prior’s servant, Hildemer, Arnold the boy.

The Charter of Hugh de Crofte. 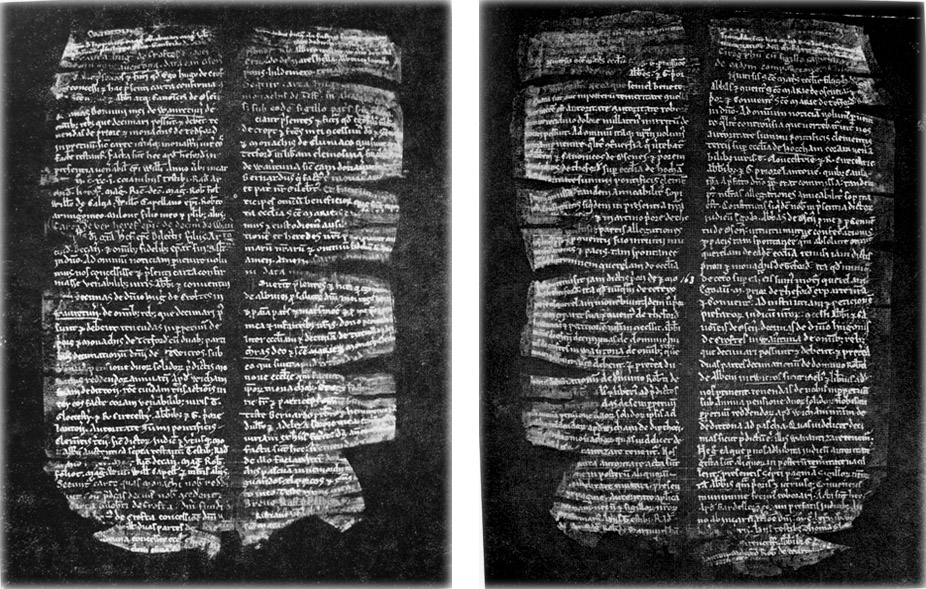 Charters of Oseney Abbey. Photostats of originals in The British Museum
These charters show that by the later part of his life, Bernard had the power to grant these tithes, and that his son and grandson had the power to confirm the grants for all time.  By this time then, the Crofts were no longer just tenants, but lords of manor in their own right.  It is also important to note that in Hugh’s charter he mentions his brothers.  One brother, Robert, is mentioned in several more documents as witness, but there were obviously more brothers, the fate of whom is not recorded.

Bernard had another son, Jasper de Crofte, who was Knighted by Godfrey de Bouillon in 1100 at the taking of Jerusalem during the Crusades.  It seems that he must have died without returning home, as he is not mentioned in any of the deeds which exist after this date.  Sir Jasper was possibly the eldest son of Bernard, and it is quite possible that if he died during the Crusades it was the reason for his father becoming a monk and helping to endow the Cluniac Priory at Thetford. This is speculation however, as there is no documentary evidence for this.

The Croft family of Herefordshire continued to grow in strength, and in an almost unbroken line of Knights and Baronets (the current Baronet is the 13th to hold the title, and his cousin is the 2nd Lord Croft of Bournemouth) the “famous and very Knightly family of the Crofts” (from Camden’s Britannia) flourished and achieved distinction on the battlefield and in offices of state.  The history of this branch of the family can be read elsewhere (a complete history of the family was written in 1949 by Major O.G.S.  Croft, entitled The House of Croft of Croft Castle), so I shall not go further into it here.  The home of the Crofts of Herefordshire likewise increased in grandeur.  We know that Bernard de Crofte held Croft at the time of the Domesday Survey (1086); where he actually lived is not known, but it is clear that there was a residence at Croft from about this period and it is probable that the present Castle is on the site of the original structure.  What form this original building took is unknown, but it could well have been an earthwork and timber castle of the motte and bailey or ringwork form which were the vast majority of castles of the early conquest period, up to the 11th and 12th centuries.  There is, however, no evidence for this.  The impressive stone building, Croft Castle, which still stands today was built sometime during the early 15th century.  Although the castle has been rebuilt and restored several times over the centuries, much of the original fabric remains.  The castle is now owned and run by the National Trust, but members of the Croft family continue to live in the Castle and on the estate.

Seven kilometres north-west of Leominster, along an avenue of oaks and beeches from the main road between Mortimer's Cross and Orleton, stands Croft Castle, a mainly 15th and 16th century castle with later additions.

The avenue from the main road comes to a halt in front of a Gothic-styled curtain wall most probably built in the 1790s. Through the arch in the curtain wall a driveway leads to the east of the castle.
The main buildings form a rectangular plan with a central courtyard. Each angle is finished with a cylindrical tower. The walls and towers possibly date from the 16th century - each of the towers contains 16th century windows. The walls on the west and south-west are slightly thicker than in the rest of the structure and may be earlier in date, possibly 15th century. The east range was reconstructed in the latter part of the 18th century.

In August 2002 Herefordshire Archaeology carried out a series of excavations in the grounds surrounding the present castle in an attempt to ascertain whether there are any earlier structures present. Approximately 25m to the west of the building stone walls were uncovered that appear to be medieval in date and could denote the presence of an earlier castle. Excavation also revealed the foundations of an undercroft (cellar), which would have most likely have been under a medieval hall, and in an outer ward of the medieval castle site an oven was found.
Between the walls of the medieval castle and the present castle was another building of brick and stone that seems to be Tudor in date and was probably part of the building that was destroyed during the Civil War.
The later castle measured 30m east to west within walls up to 1.2m thick. The south corner was at a right angle, but the east wall extends further to the north than the west wall. At each corner stands a tower, 3.3m in diameter and containing tiny rooms.
It is likely that the courtyard was originally reached through the gatehouse on the east side and that the medieval hall was on the west side, with two-storey ranges on the north and south sides of the court. No medieval features remain, and the four ranges are now three-storeyed; the corbelling on the tower marks the base of the original parapet. Dendrochronology of the timbers within Croft Castle date the earliest timber in the castle to 1662-3, which was the period when Herbert Croft was bishop of Hereford.

The 16th century north range is now the kitchen and library block. The east range was reconstructed c.1750-60 and the current porch and gable date from 1913. 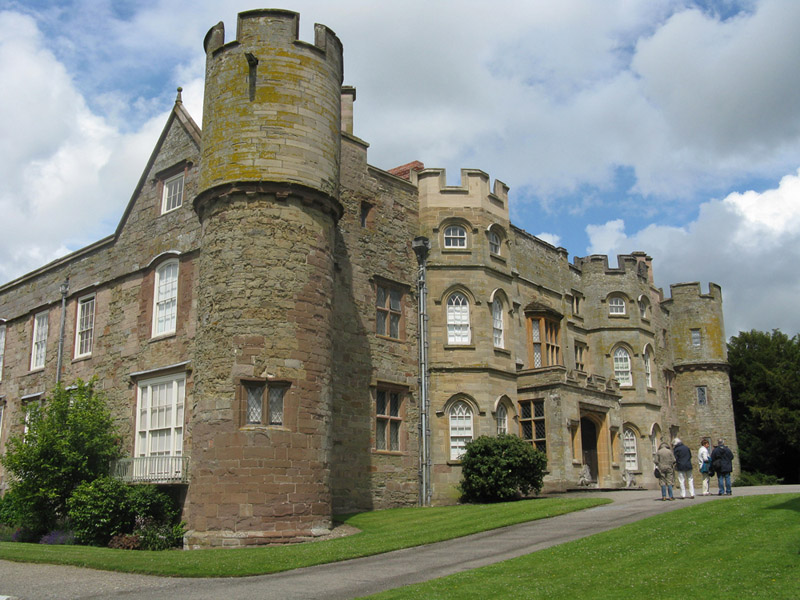 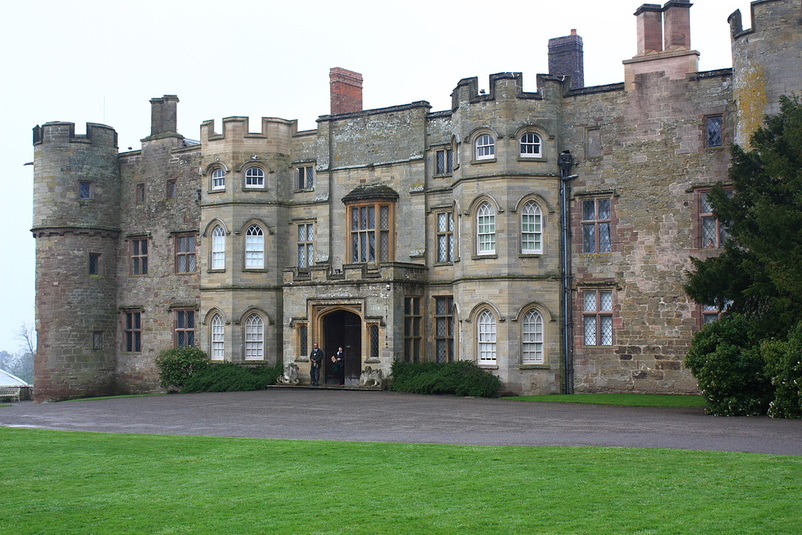 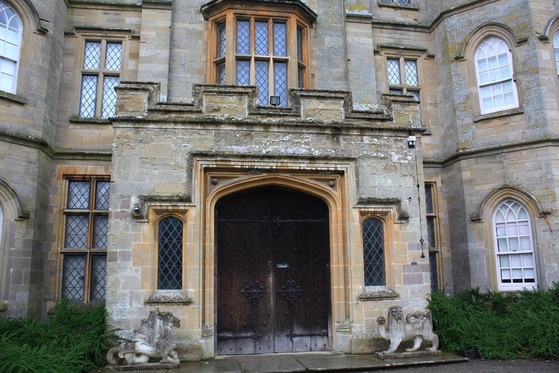 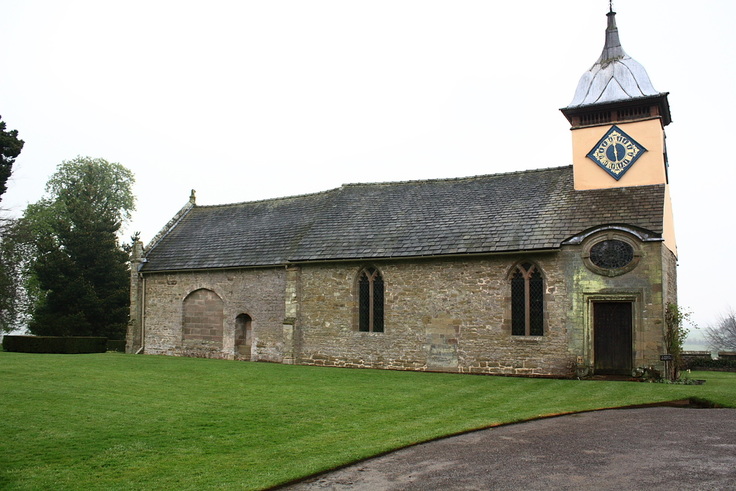 Croft Church, Adjacent to the Castle 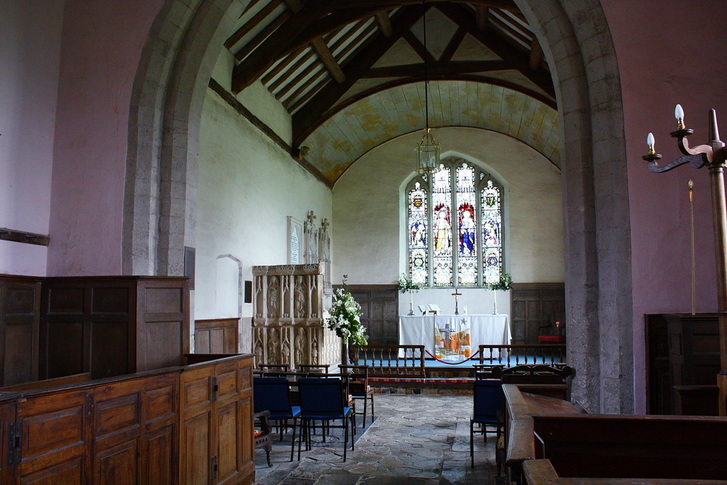 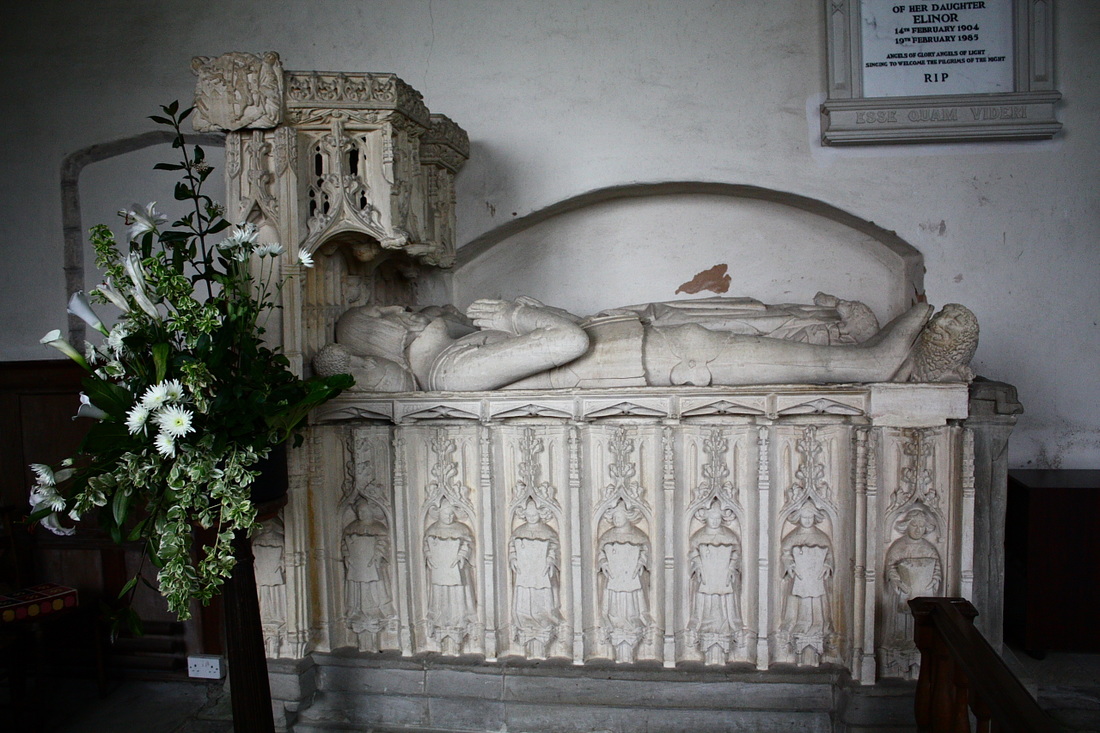